After 6 straight months in Vietnam, and after, miraculously, receiving my residency visa, I was itching to get out of the country even for a short while. So when I met a traveller heading to Kuala Lumpur, and happened to have flexibility in my work schedule (5 days in a row off), I jumped at the opportunity. Malaysia was a country I had heard travelers raving about while I was in Bali, and I wasn’t sure if I’d have another chance as good as this one.

Upon flying into Kuala Lumpur, another large South East Asian city, the differences are apparent immediately. We hop on a Chinatown bound shuttle bus, and drive for nearly an hour before skyscrapers and cityscapes begin popping up from dense tropical forests.

The city itself has plentiful flora, the buildings and roads seem ridiculously clean and well-maintained and immediately evident is the absence of intense noise pollution which plagues Ho Chi Minh City–undoubtably due to the abnormally high number of buzzing and growling motorbikes. Here in Kuala Lumpur, myself and my travel companion, another English Teacher of Saigon, find ourselves perplexed on how to cross the road in the presence of such organized traffic patterns. 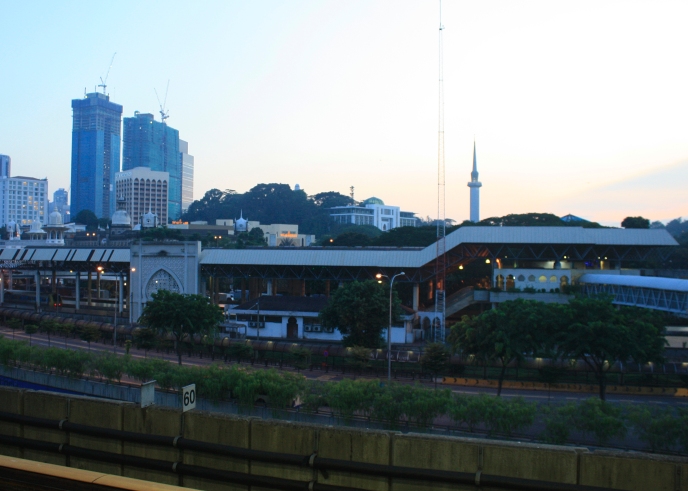 We check into a cheap and pleasantly run down guesthouse, then spend the afternoon getting aquatinted with our neighborhood. And by aquatinted I mean drinking cold beer on a busy street-side cafe in a prime people-watching spot. At nightfall we hop on the city’s excellent sky train (an efficient public transportation system=always a good sign), and head in the direction of the famous Petronas Twin Towers. A lucky mistake has us getting off a stop early, in the infamous foodie neighborhood Kampung Baru.

Kampung Baru is a strangely quant enclave in the heart of the city originally set up in the 1900s as a place where the native Malay people could maintain their village lifestyle within the confines of the quickly growing metropolis. In this neighborhood, small, charming homes replace fancy apartment buildings, and street food stalls and cute little shops replace tall, shiny banks and Western style malls. We stop for a smoothie and a bite to eat at a little thatch roofed restaurant with a 5-star view of the electric cityscape. 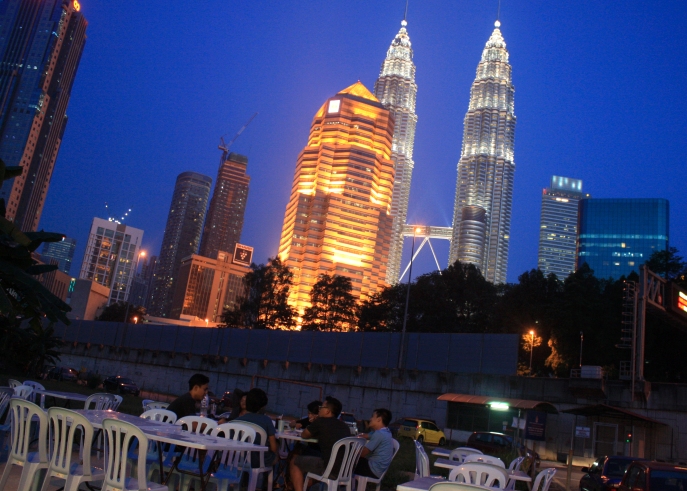 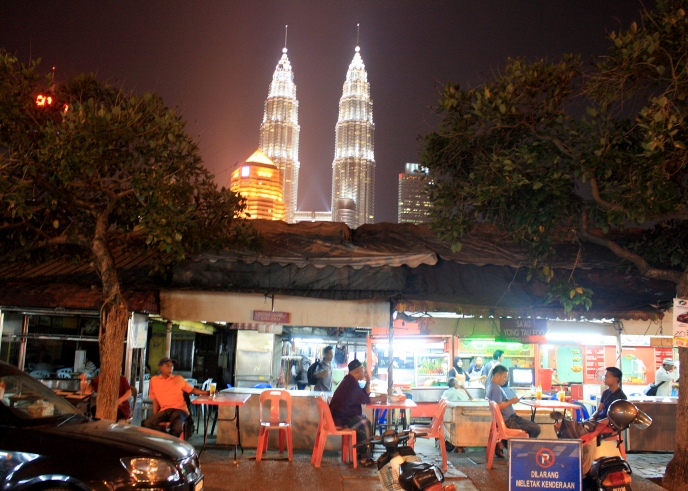 After a quick wander, admiring the juxtaposition of the old world and the new, we take a long walk, looping around the city, eventually ending in front of the city’s most famous and stunning manmade wonder. 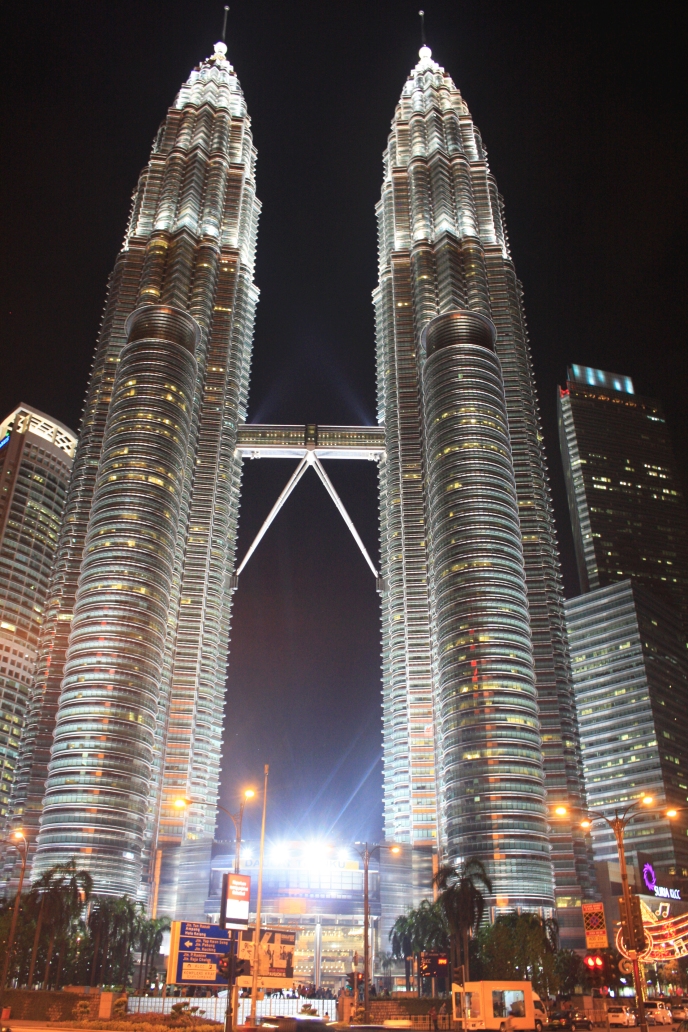 The base of the tower contains a very modern mall, which, with it’s clean and shiny marble floors and highly air conditioned interior, had us feeling like we could have been in any modern city in the world. Behind the towers sits an outdoor pavilion of sorts with expensive bars and restaurants and a large pool with fountains, which plays synchronized water and light shows periodically throughout the evening.

Once we’ve had our fill, we make our way back to Chinatown, in search of cheaper food only to learn that many of the restaurants and cafes have already closed. Once we’ve consumed a disappointing street meal of fishy fried noodles, we finally sit down for our first bit of trip planning. After just a day in this new, steaming hot city, and 6 months in another, we both quickly agree we’re ready for fresher pastures. We decide to make the (alleged) 3 hour ride to the Cameron Highlands.

The Cameron Highlands is Malaysia’s agricultural hot spot. A lush, green paradise with rolling hills in a location just high enough above sea level that it provides the ideal climate for growing crops like tea or strawberries and for hosting tired travelers looking for an escape from the chaotic city.

We will spend our next three days at an adorable and affordable guesthouse on the outskirts of the highlands largest town, Tanah Ratah. Our guesthouse, with it’s large garden, soft, freshly mowed grass, lawn furniture and fire pit, will serve as our home base for exploring the surrounding area. We will spend evenings in the garden or at the fire, and days exploring our pastoral surroundings.

On our first afternoon we take a long walk through jungle paths, and around vegetable farms, stopping at a bee farm and to admire the scenery. Not wanting to make the long walk back to our guesthouse, we hitch a ride back to town with a couple of friendly men on their way home from work. This is not the first time we are delighted by the open kindness of the Malaysian people. Throughout our trip we meet countless laid back and friendly people, all of whom speak English. This is particularly refreshing, as trouble communicating with the locals is an issue we, Westerners in Saigon, have grown all too familiar with. 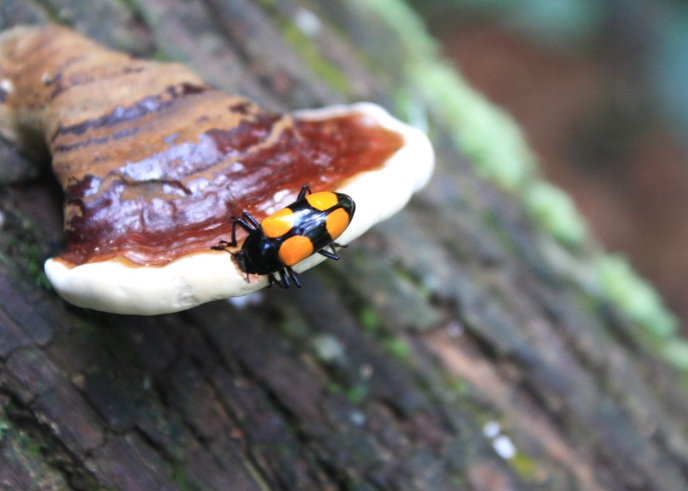 While walking around in town, we notice tourist agencies advertising treks that lead to the “Largest Flower in the World.” Unable to resist, we book a half day, off-roading and jungle trek tour in search of the famed Rafflesia flower.

An old school Land Rover picks us up the following morning. Our guide, a bulky, pony-tailed man wearing a floppy cowboy hat and an impressive handlebar mustache–a real, Malaysian Buffalo Bill. We drive along the highway for nearly an hour before turning onto a side road which eventually disappears, morphing into bumpy dirt trails. Our four-wheel drive barely climbs the rocky and unstable earth and we must hold onto what we can to stable ourselves and avoid ramming into one another. The Rover stops and we are instructed to get out and begin the jungle trekking portion of our adventure.

Over the course of our hike we learn that our guide is in a friendly motorcycle gang and that he loves his dogs so much he refuses to smoke cigarettes in front of them. We also learn about the flower we are to see. Our guide shares that the Rafflesia is actually more of a fungus and parasite than an actual flower, as it has no true stems, roots or leaves. Each parasitic flower blooms only a few days before it dies. Apparently some types of the species produce a scent similar to rotting flesh, gaining it the nickname the ‘corpse flower’. After an hour of walking through the rainforest, we see the large red fungus upon a log near a rocky brook. The flower looks surreal and cartoonish and instantly reminds me of the film Avatar. However, there was nothing particularly corpse-like about it’s odor. 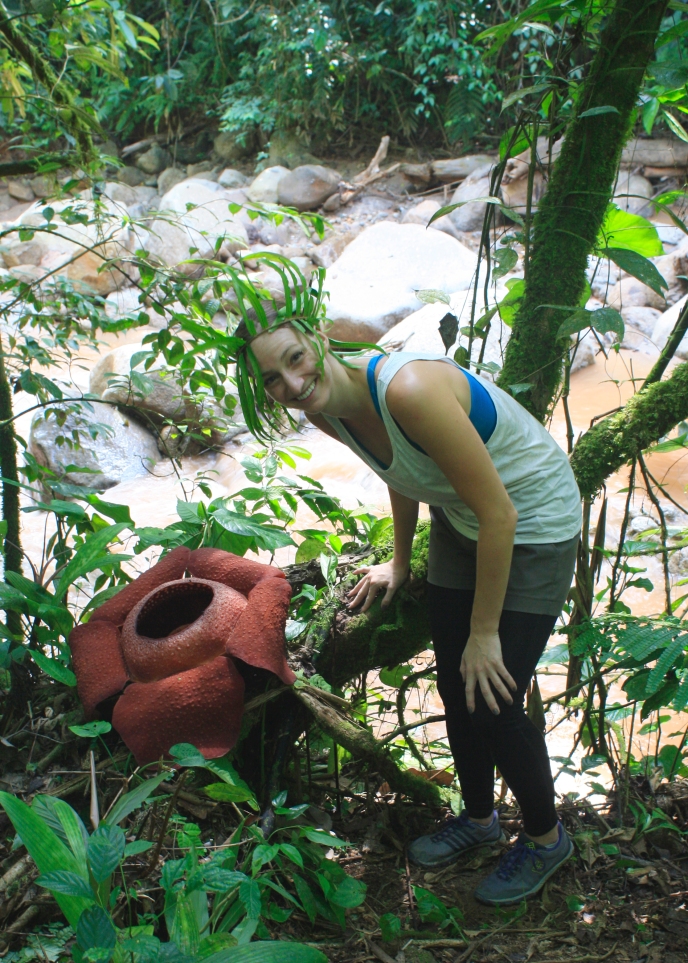 Once we’ve had our fill of Rafflesia we turn around and make the hike back to the Rover, before the equally bumpy off-road journey back to the highway. The tour ends with a hearty lunch of Indian Food. In a country where the food culture is heavily influenced by large populations of Indian and Chinese, both cuisines are never hard to find. On our ride back to the guesthouse, our guide takes us past the stunning tea fields, for one last glance and photo-op. 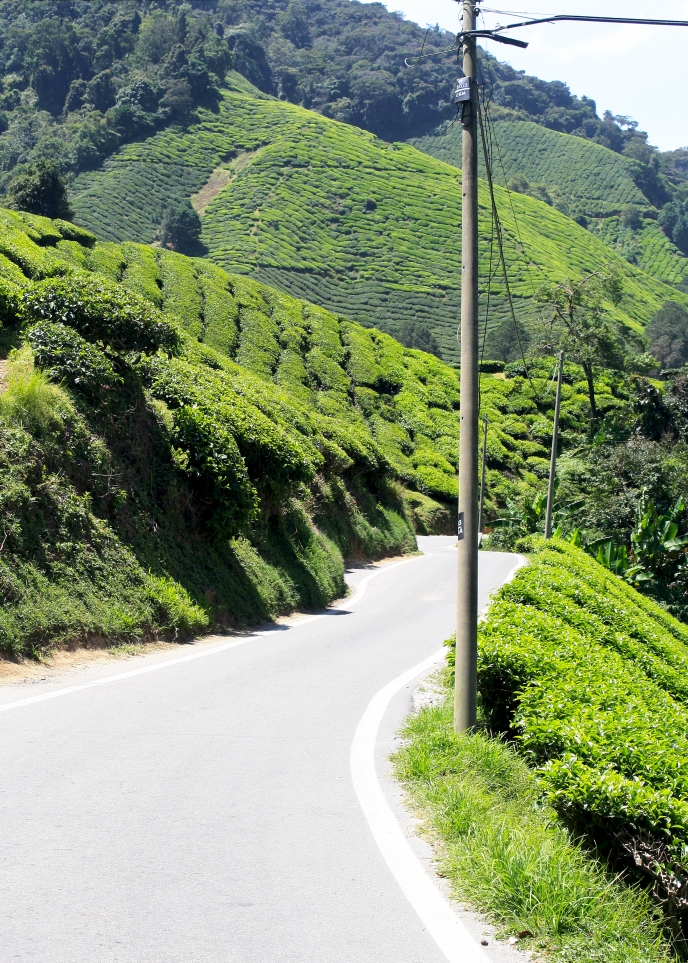 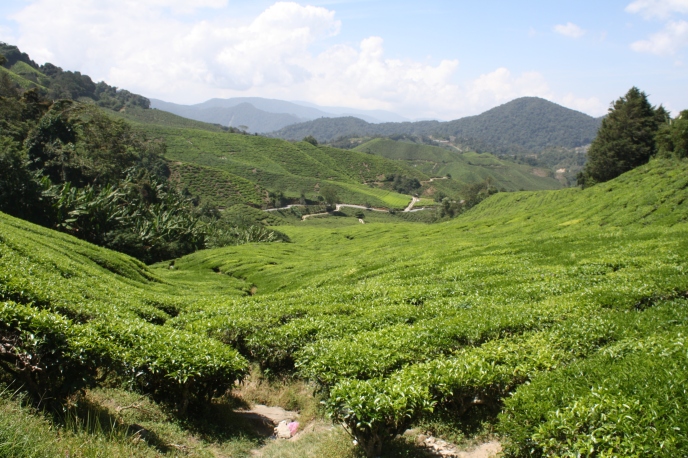 Friday, and my flight back to Saigon comes all too fast. So fast, in fact, that I miss my departure. Our bus takes hours longer than predicted, which begins a chain of events that ultimately have me arriving to the airport an hour after my flight had left. After spending several hours running back and forth between airline counters and the information desk, it becomes evident that if I’m going to get home that night, or before work on Saturday morning, it’s not going to be free. Finally, exhausted and frustrated, I take my best offer, pay more than I’d like to admit and get on the last flight to Saigon, finally arriving 7 hours later than planned.

A price I was willing to pay for a much needed getaway from the city, from teaching and from Vietnam …

You may want to check out:
Holiday in the Mekong
A jungle retreat in Cat Tien National Park