There are few places in Colombia as talked up as Tayrona Park. So for that reason, I wasn’t sure what to expect. Often these over-hyped spots are slightly to severely overrated.

From some, I had heard great things: “paradise,” from others- more mixed reviews- “overpriced.”

What did I think?

…I suppose, a little of both- an overpriced paradise …

Anna and I took the steamy walk to the tayrona bus stop in my new home base city for the next month- Santa Marta- and hopped on the even steamier bus heading north.

One rather uncomfortable hour later, we found ourselves at the gates of Tayrona Park. After a quick bag search and a $35,000 peso (US $17) entrance fee we caught a very hot (do you see a pattern here?) shuttle bus to the trail entrance.

About an hour of hiking through picture perfect jungles, had us arriving at a restaurant and camp site on the beach. This is the first beach in series of beaches worthy of romance novels–waves crashing passionately against massive boulders. But this beach was far too dangerous for swimming (a signed warned of the large number of drownings occurring here).

After stopping at a discrete bakery in the jungle and snagging one of the best treats I think I’ve ever consumed–giant, fresh, doughy rolls with a ooey-gooey chocolate filling–we continued on a lovely trail which took us past more rudimentary restaurants, juice or ceviche stands, passing by more beaches–each more stunning than the last.

And after another hour of walking, we reached Cabo San Juan–the biggest campsite, on arguably the prettiest beach. However, a long line at “reception” for our hammocks, stood between us and refreshing our sweaty bodies in the chilly ocean.

Naturally, while in line, we ran into a group of guys we had run into on several other random occasions. As the line dwindled, we heard the rather devastating news that no hammocks remained, and we would have no choice but to share a tiny (and, again, steaming hot) tent–for the high price by Colombian standards of around US$25. Thus proving the vast number of backpackers who had invaded the at one time secluded park.

Our campsite (and little red tent) in Cabo San Juan

After a few seconds of sulking we dropped our packs off at said tent and ran to the beach.

A colorful sunset followed by a long leisurely meal (we brought the supplies for tuna sandwiches to avoid the limited, and pricy, dinner options) with our travel buddies made for a pleasant ending to a long, hot, but highly enjoyable day. 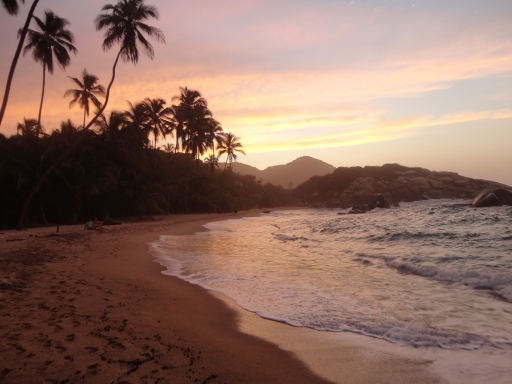 Sunset on the beach

The next day, we are awakened early by the hot sun, which has turned our little red tent into a confectionary oven. Luckily we have an extra chocolate bun and fresh coffee waiting for us for breakfast. We spend the next several hours basking on the post card perfect beach, plunging into refreshing water, and reading in the sun, along with the masses of other travelers who had decided to visit Tayrona (many of whom we had met before). 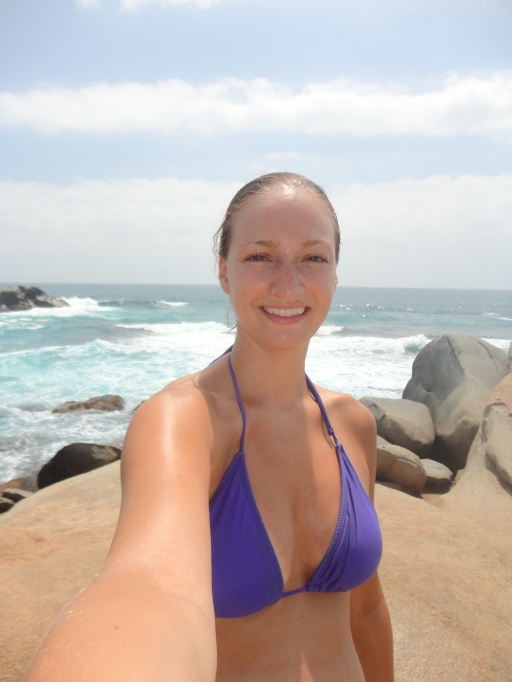 Happy to be in Tayrona Park 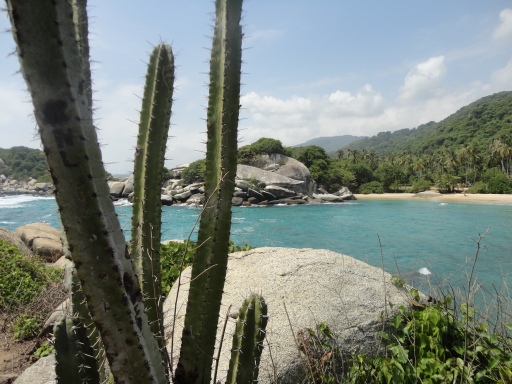 The same walk through jungles and beaches from the day before took us back to the bus stop for Santa Marta.