Taking the Long Way to Lombok 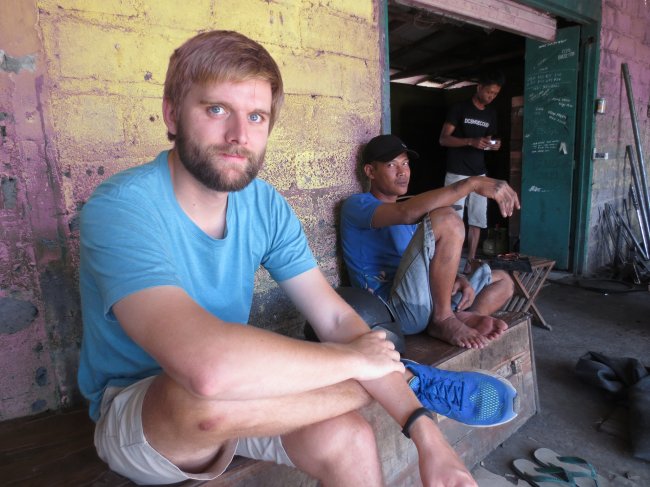 The tire began wobbling in an ominous way. We quickly pull to the side of the road and inspect our bike. Sure enough, the tire is soft. We scan the area. Busy highway; crowded roundabout ahead; gardens and plant nurseries line the streets.

We see some local men on a smoking break and point to our sad-looking tire; they direct us across the highway. We thank our lucky stars and gingerly take the bike over to a conveniently located mechanic shop.

We intended to make this journey the day before. A trip to the nearby island of Lombok had been in the works for a few weeks. However this also turned out to be the day our Visa Lady finally informed us our passports were ready; we were needed in the Immigration office in Denpasar for photos and prints.

So now, instead of booking a simple transfer to Lombok, one which would conveniently pick us up by shuttle bus from our home and take us straight to the 2 hour fast boat, we would be taking the long way. An adventure!

We figured we could drive our bike to Denpasar quickly, do our business and catch an afternoon ferry. However, these things rarely go as planned.

And so we found ourselves at a grimy mechanic shop about 10 minutes from the immigration office.

One man tinkered with the bike while the other two idly watched. In the 15 minutes it took to fix the tire they spend much of it very obviously talking curiously about us in Bahasa.They, like many people in Asia, seem perplexed by Jim. With his tall frame, shaggy blond hair and bushy beard–he is about as Caucasian as they come. 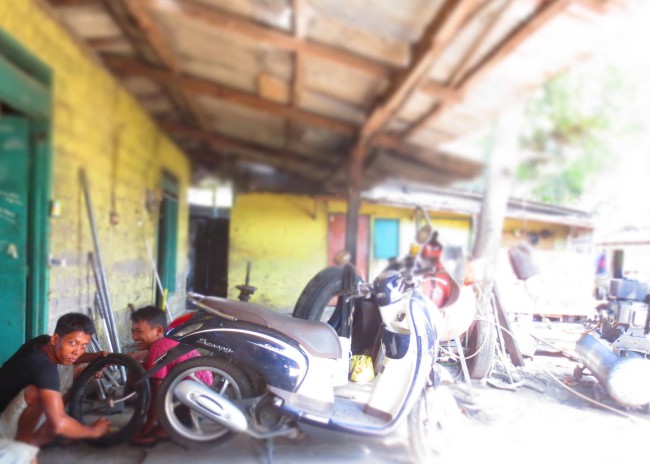 Soon enough, we are on our way; and feeling pretty excited that it was only the inner tubing (a 50 cent fix) and not the entire tire (a $20-30 fix) we had to replace.

At the immigration office, we meet a friend of the visa lady, who gives us our queue numbers and we are shuffled into a crowded waiting room overflowing with tired looking foreigners and nonchalant locals, who are likely accustomed to their country’s inefficient bureaucratic tendencies.

We soon notice all the foreigners giggling. In the corner of the tiny room sits a television which plays a never ending loop of “Just for Laughs: Gags.”

For those of you who have never been stuck on 20 hour bus rides in South America, or long distance overseas flights, Just for laughs is a silent hidden camera show featuring “hilarious” pranks on unsuspecting pedestrians. A sort of French Canadian version of Candid Camera. Because a silent format requires no translation and pranking unsuspecting pedestrians is funny the world round, Just for Laughs:Gags has been purchased and used in over 100 countries, in airports and by airlines, buses–and clearly by immigration waiting rooms as well. If you’ve done any amount of traveling, chances are you’ve run across it.

Frankly, it was genius. We, along with the other members of our queue, fell into a hypnotized state and hours melted away as we, first, waited for our photos and fingerprints, and later, waited to get our passports back. Already tired and at the mercy of someone else’s schedule, we were in the perfect state of mind to stare at a TV screen and watch mindless television, giggling at things which are not normally funny.

In fact, we were barely bothered when finally Jim’s number was called and he disappeared into the photo room for two minutes of business, and when promptly after, an announcement rang out stating the office would now be closed for lunch until 1 pm. This was immediately before, my own number was called,

And so, we’re stuck at the immigration office for lunch and for a few more hours.

We were informed of a small warung out back serving chicken and rice for pocket change. We were happy. We returned to the waiting room an hour later, watched a bit more goofy D-list Canadian improve actors pulling gags on the streets of Quebec, and finally, my own number was called. Two minutes later our business was complete… or so we thought.

We speak with our visa correspondent, asking her when we can snatch our passports and be on our merry way. She says we can pick them up in Ubud tomorrow….

wait…TOMORROW?? Whuhhh? But we’ve got a ferry to catch! This won’t work! We tell her we need our passports today. She tells us to come back at 3:30.

We now have over three hours to kill before we can leave DENPASAR!

Lucky for us we are mere minutes away from a tall, perplexing public building we’d both love to investigate. On our way into town, we’d noticed the bulbous ornamental building with sharp, pointy accents and large surrounding park. Turns out this building is The Bajra Sandi Monument. One of Bali’s lesser known attractions, we’ve stumbled on a monument and museum commemorating Balinese struggles and celebrating their triumph. 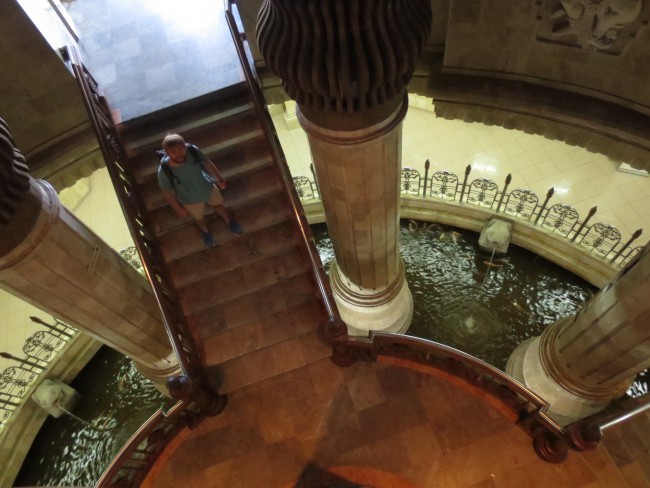 We kill a few hours walking around the park, looking at the museum filled with strange miniature diorama’s illustrating Bali’s violent history and climb the winding staircase to a viewpoint tower. After a brief coffee, we head back to the office on time to watch more stupidly mesmerizing television.

PART II:
Magic on the Public Ferry to Lombok.

The ride from Denpasar to Padangbai becomes increasingly stunning each mile away from the city. Leaving South Bali and entering East Bali, small green mountains emerge to our left, and to our right–the sparkling sea.

We arrive before sunset and are instantly greeted by the usual tout characters.

“You want fast boat to Gilis!” they shout.

“No we don’t,” we say, shaking our heads politely, “We want the public ferry.”

We had been warned of these men. They’d try to trick us into buying their tickets. What these men don’t know is that we’ve just watched nearly 6 hours of bullshit­–we weren’t falling for this. We see another foreign couple on a motorbike and decide to team up with them. They immediately seem like the types who’d attempt to take their bike on a public ferry to Lombok.

We are right in our assumptions. They are Slovakians on an adventurous honeymoon.

We decide to go straight to the source head for the ferry office.The man there is friendly and helpful,

“Why you want to go to Lombok?? It’s Ramadan. Nobody eats. Everybody chant all day and all night long. It’s no fun. You stay here in Bali. It much nicer.”

….er…um… “But we want to go to Lombok. We’ve already been in Bali for a month and we will be back after 4 days.”

We are sold at dolphins. We ask him exactly when to come tomorrow morning, he responds with, “You don’t worry about time. Boat comes once every hour.” Hmmm… Ok.

Jim and I and the honeymooners have dinner at a nearby restaurant, discussing our options. We decide to stay in Padangbai for the night, at the nearest, cheapest hotel we can find. It’ll only be a few hours before 4 AM.

The $10 guesthouse we will call our temporary home, is just meters from the ferry dock. We can see the hourly boats come and go. Since the docks don’t seem to keep a regular schedule, we can peek out on our balcony and see when our boat is arriving. Perfect.

Happy with our decision to stay for the night, we head for after-dinner drinks at a chill beach spot. We go back early and try squeezing in a few hours of shuteye before our early departure.

Our seemingly perfect spot for the night is seemingly made of cardboard. Each hour of the night, with each hourly departure horns are sounded and blaring announcements send off each boat. Needless to say sleep was not a relaxing pursuit. We wake groggy and confused; scramble to gather up our things and hurry to fetch our bikes.

We drive a few feet before we hit a checkpoint.

“License” the dock security worker says as he places his hand up. Naturally. Though he has broken English, he says it in a way that’s obvious he knows we don’t have one.

We look at each other, shrugging. It’s 4 in the morning. The docks are dark though busy with early morning travellers. Our eyes and brains are cloudy.

Jim takes out his American license. “Al…a …bama,” the man says, “No, this not right. This no work. You can not go to Lombok!”

Since we do not have the International Drivers’ License the man is looking for, Jim hands him 200,000 Rupiah. We aren’t even sure this is a real security guard.

Satisfied, the man signals us through. We can go to Lombok…

Irritated that we just wasted more money bribing officials to let us drive our bike, we quickly buy our tickets and head directly onto the ferry, stopping only once to purchase a nutritious breakfast of Pringles and biscuits.

The sun won’t rise for another hour and a half so we find empty benches and snooze. When the time comes, we awaken and head to the front of the boat.

With the exception of a few drousy-eyed locals, we are the only ones who catch the show. The horizon is a grey silhouette showcasing Mt Rinjung and a line of small mountains, the sky behind burns orange and red, and the black clouds in the sky are like billows of smoke. We stare, mesmorized until the sun appears. 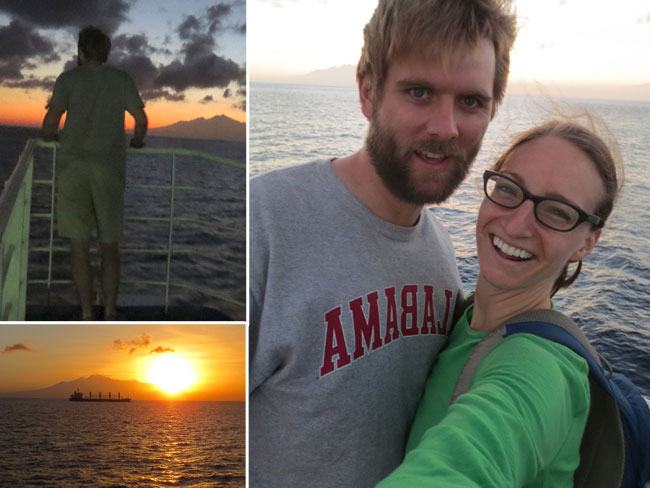 Now it’s dolphin-spotting time. We stare into the sea, watching for movement, our eyes play tricks on us. We watch for an hour before we see the shapes appear. They swim in a group of four, racing with the ferry, disappearing much too quickly.

Satisfied, we return to our benches and sleep the remainder of the ride. I’m groggy and exhauseted by the time we hit the docks. Upon driving onto new land, it’s immediately apparent we’ve arrived in a place so close to Bali in distance yet so far away in culture. But more on that another time…

Interested in taking a motorbike from Bali to Lombok?

In the end, we probably would have been happier had we just taken one of the inexpensive fast shuttle services offered all over Bali. A van picks you up at your hotel and takes you straight to the fast boat in Padangbai. The one process from Ubud will take less than 3 hours and we saw several places with prices around 300,000-450,000 rupiah, and even some claiming to do it for as low as 200,000.

Take note that while the motorbike route is cheaper (120,000 rupiah for 2 passengers and a bike!) and more adventurous, it is significantly longer and less comfortable. Ferries run every hour, 24 hours a day, but not necessarily at a designated time. They typically leave only after they fill up so be prepared to wait. The ferries dock in Lembar, which has no hotels or much of anything at all, so if you arrive on a late ferry, be aware that now you must drive at least 30 minutes in the dark before you find a suitable guesthouse.

Also be aware that there are numerous police checkpoints spots along the way. If you don’t have an international license, be prepared to pay up. It’s also a good idea to have your bike’s original registration, which should be available upon request from your renter–if they’ll allow you to leave the island, that is.

If you plan on popping over to the Gili Islands, know that you cannot bring your bike. There are lots you can store it in for a small fee near the boats. We hit the islands on our last few days and had to return to mainland Lombok,drive 2 hours south and get the ferry in Lembar.